With particular emphasis on art and fashion, Barry has worked within the world of design for more than 20 years. His 2018 London exhibition led to several pieces now being held in public and private collections across the world including the Netherlands; USA; Germany; Scotland, England, Spain, France, Ireland and Luxembourg.

In 2017, his “Chaos over Moscow” canvas was exhibited digitally at the Saatchi Gallery (London) and he has shown at various art fairs since including the Chelsea Art Society Annual Exhibition in June 2022.

In 2021 he sold his first work at auction in New York.

“As the sun drains all colour from the trees, a myriad of shades and tones remain just briefly in the sky.”

He is a Freeman of the City of London and a Fellow of the Royal Society of Arts. He was made MBE in 2011 by Prince Charles at Buckingham Palace and was awarded Honorary Doctorate of Design by Southampton Solent University in 2014.

To shop online for these artworks click: Saatchi Gallery Online

If you would like a special discount for more than one piece or to arrange a personal home delivery including an artist’s dedication on the back of your paintings, please contact me directly at…  mail@barryladen.com

EXHIBITIONS & ART FAIRS
GET IN TOUCH 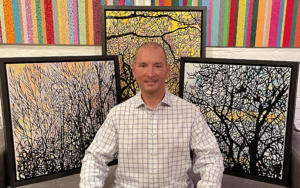